Well to start, the plan was to end up in Port Jervis NY, for about a75 miles ride.  So here is the story….

After a great night with Michele’s parents, they dropped me at the pick up point at  7:30. I was a little worried about how the gears would act and sound but the cleaning and adjustments of the night before paid off and they sounded great!  It was a cool 47 degrees and I was in the shade, chilly! I peddled 11 miles to Philipsburg, NJ and then consulted with my great friend Jim Mower.  I am riding solo but I have not been alone, Jim has been a hugh help and today was his biggest day! Jim rode across country with me 5 years ago and last year he and his wife Mary rode this same route from Bar Harbor to Key West. he has called me every day and he encourages me and I get route advice.  I was looking at the most hilly day of the trip for the next 50 miles.  So he and I came up with an alternate that would parallel the Cycling route but be less hilly, great for me.  Except for a big nail in the rear tire, the one that is acting up, a detour that I was able to walk around, the first 20 miles were great. After a quick lunch I was off again while Jim checked the next 40 mile alternate route.  Going down a hill a hand a rhythmic bumping feeling like road bumps. It was to rhythmic for me so I stopped mid down hill, I never do that.  About 3 inches of my rear tire was off the rim and the thumping was when it hit the brake.  I started to reach for it and the tube exploded. So while Jim looked for a bike shop, I moved the good front tire to the back, the crappy back tire to the front and all I had was patched tubes now.  It took  4 try’s with tubes and 1 hour and 45 minutes, I was limping off route to a bike shop Jim had found. I  was lucky there was one within 7 miles.  They told Jim they had the right tire and tubes.  Well they did not, so right now I have a smaller tire, a couple of patched tubes and have called a shop 35 miles ahead and they have the right sizes.  So with luck I will limp there and get it fixed in the AM.  So I am in a Stroudsburg hotel, now having to plan different stops than I have already planned.  This will add another day.  Oh we’ll,it did not blow when riding. I’m getting ready for for a short 55 mile ride tomorrow, it’s that or 85 and hills and a bike shop stop will prevent that.  So I’ll sleep in a little!  The Swift House Inn, middlebury Vermont and Michele are still 360 bike miles away or 5 days ridding.
Pictures are; Parents, the nail that caused the flat, a rider best find and the Delaware Water Gap in the distance 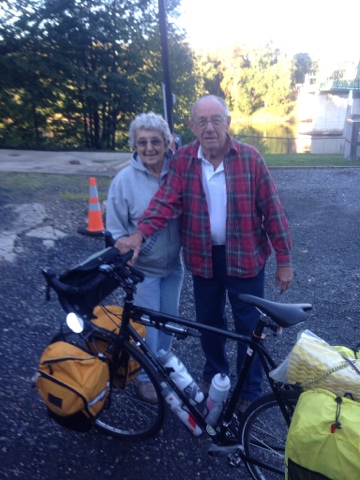 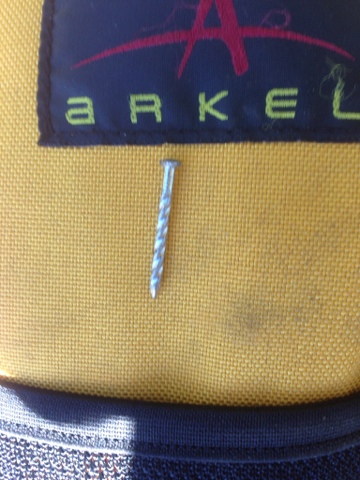 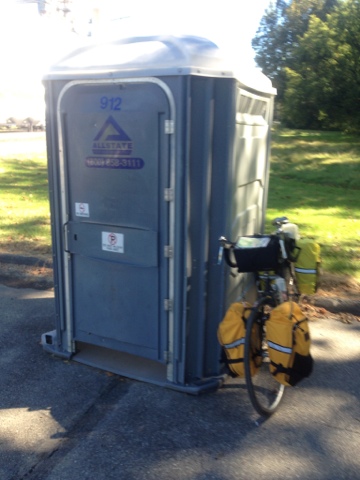 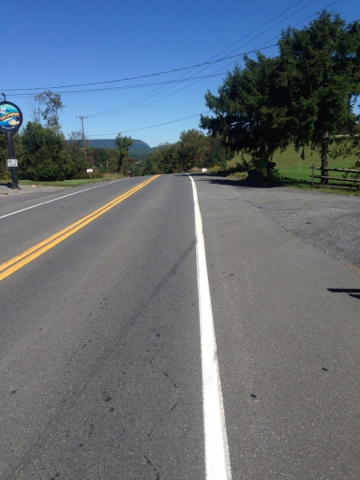